IoT, new developer platforms, devices, software, solutions, women in technology & more.
This blog expresses my opinion & not that of my employer.

A Have-to-See: “We Live in Public”

This looks slightly scary, yet hypnotically magnificent. I am going to have to go track down a theater in Seattle to go see this for sure… In watching the trailer, it reminds me a bit of the surreal environment I lived in right after college - San Francisco in early 2000s – the parties, the madness, the money… and then the fall. Wait – or is this a premonition for what we WILL experience? You tell me…

I think this is a must-see for this weekend. Especially since I am expecting this.

Enjoy – and if any of you have seen this – I welcome comments/feedback! /LC 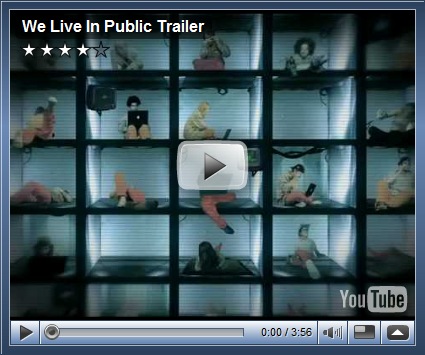 “On the 40th anniversary of the Internet, WE LIVE IN PUBLIC tells the story of the effect it is having on our society as seen through the eyes of the greatest Internet pioneer you’ve never heard of, visionary Josh Harris. Award-winning director, Ondi Timoner (DIG!), documented his tumultuous life for more than a decade, to create a riveting, cautionary tale of what to expect as the virtual world inevitably takes control of our lives.”

I attended a friend's Christmas party last night, and a few of us got into a discussion about our favorite movies this year. After quite a number of suggestions, the movie "Once" was the group favorite.

I saw this movie several months ago, at an exclusive preview at the Roxie Theater in SF. My friend Molly got the scoop that this independent film was coming to town as part of the Sundance Film Festival tour, and not only did they show the movie, "Once," to a packed house, but the actors in the film showed up, discussed making the movie, and even played a few tunes from the film.

I'm not normally a fan of musical movies (I didn't like "Dreamgirls" and I won't be watching "Hairspray" anytime soon) but this was a fabulous mix of music, writing, acting, and much more. Check out the trailer, and then rent the movie - it's evidently heading to DVD this week.

Carlos, I fully expect you to comment on this one since you seem to be the leading critic :)  /LC

Check out the trailer. /LC